is “A Great Face for Radio” by my good friend John Anderson, and it has been updated and is being re-published this Autumn.

Ando’s tale of a young man working his way around the world as a sports reporter was a big hit when it was published a few years ago. I asked my daughter to buy it for my Christmas present and I read it a few days later on a train journey. Well, I started to read it, but had to stop as it was making me laugh out loud too much, to the annoyance of several passengers.

I have known Ando for many years, he had just joined Independent Radio News in London when I became sports editor of Mercia Sound in Coventry in 1987. Years later we shared many a gantry together, me working for Match of the Day and he for Football First for Sky. In fact I think we were the commentators on duty for the famous Tottenham 9 Wigan 1 match at White Hart Lane a few years ago.

A Great Face for Radio has been updated for it’s re-issue; with new chapters detailing Ando’s adventures at the World Cup in 2010 and at Euro 2012, where he and I were colleagues once more when we were both working for talkSPORT.

Ando has a terrific style of writing (which I greatly envy) and it’s also fun to try and spot the more obscure music references within the prose. If you’d like to know a bit more about the mad job that he and I do, get hold of a copy of this book. Just don’t read it on a train. 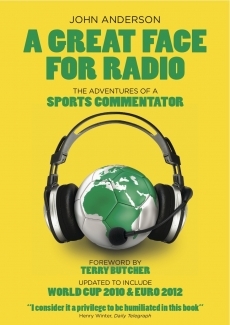 John Roder is one of the leading freelance football commentators on television. He commentates on the Premier League for the prestigious and world famous BBC programme Match of the Day; and is a regular voice on tv stations all around the world.

There are two ways in which you can contact me. Find my details below to get in touch, either directly to me; or to Excellent Talent.